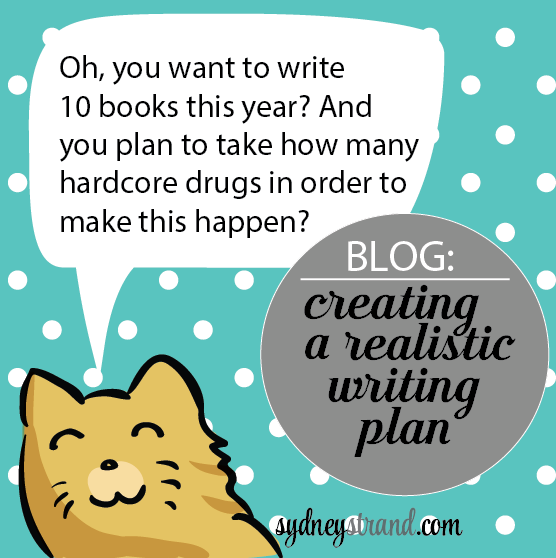 I'm so super proud of myself. Today, I saw a tweet from a publisher looking for the kind of stuff I wrote. This publisher--rather, this imprint--gets its books into Target--a big, huge deal (not that many books get into Target). I heard the siren's call.

And for a moment...nay, five minutes' worth of moments...I contemplated speed writing a book of 50,000 words by the January 30 deadline.

Nevermind that it would be total first-draft crap.

Nevermind that I would pretty much be a very neglectful mother, putting her children in front of the TV for, well, every waking moment.

Nevermind the chocolate and stress that such an endeavor would entail.

Luckily, at Minute Six, sanity returned. And I put this story into my Goals for 2016. And I created a Pinterest board for that story and the ideas that came to me in those five gloriously insane moments.

You see, I have a writing plan for 2015. And this Five-Minutes-of-Crazy Story doesn't fit in that plan.

Let's Do This Thing

So. Creating a writing plan. Let's see what works, what doesn't work.

First, a quick note: I teach online college English and I have two small children. This means that I have time to work between four and eight hours each day, depending on my energy levels and other obligations. A lot of nights, I fall asleep at my computer on my lap, and I end up working from 1 a.m. to 4 a.m. to make up for the lapse. Other times, I lose a whole day piddling around with book covers or other visual art endeavors--my second professional love.

I created an overall Vision Plan, which included Mission Statement and book series I wanted to create: 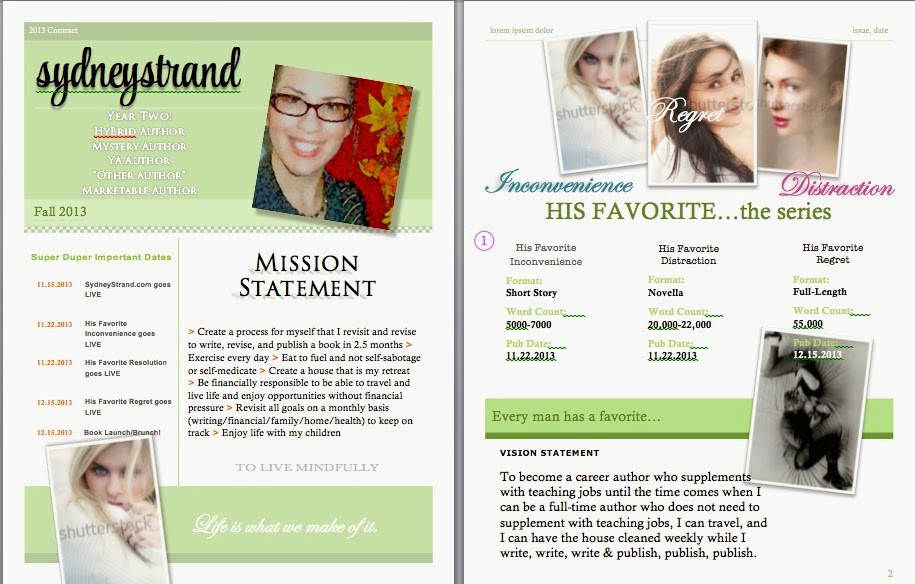 His Favorite Inconvenience was supposed to be a short story--it became a novella (I wrote it after His Favorite Regret, as I let HFR stew, and I found I wanted to keep writing Sera's fun story!) 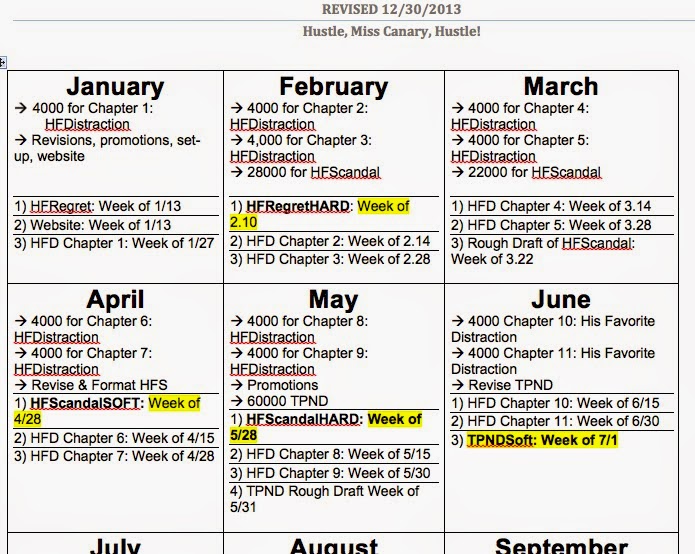 Now I take a look at it and see that I TOTALLY DID NOT STICK TO IT. Mainly because I decided to create another series (Bad Mom Rents a Man) in addition to the series I had planned (His Favorite). I was also supposed to create a boxed set, but I didn't do that because I wanted to let the individual books breathe before I went back and polished anything for a larger, bigger product.

I also create a daily list the night before and attempt to get through it the next day. I attach it to the month's goals (which I revised on 1/24, so that list on the ruled paper is only for 1/24-1/31): 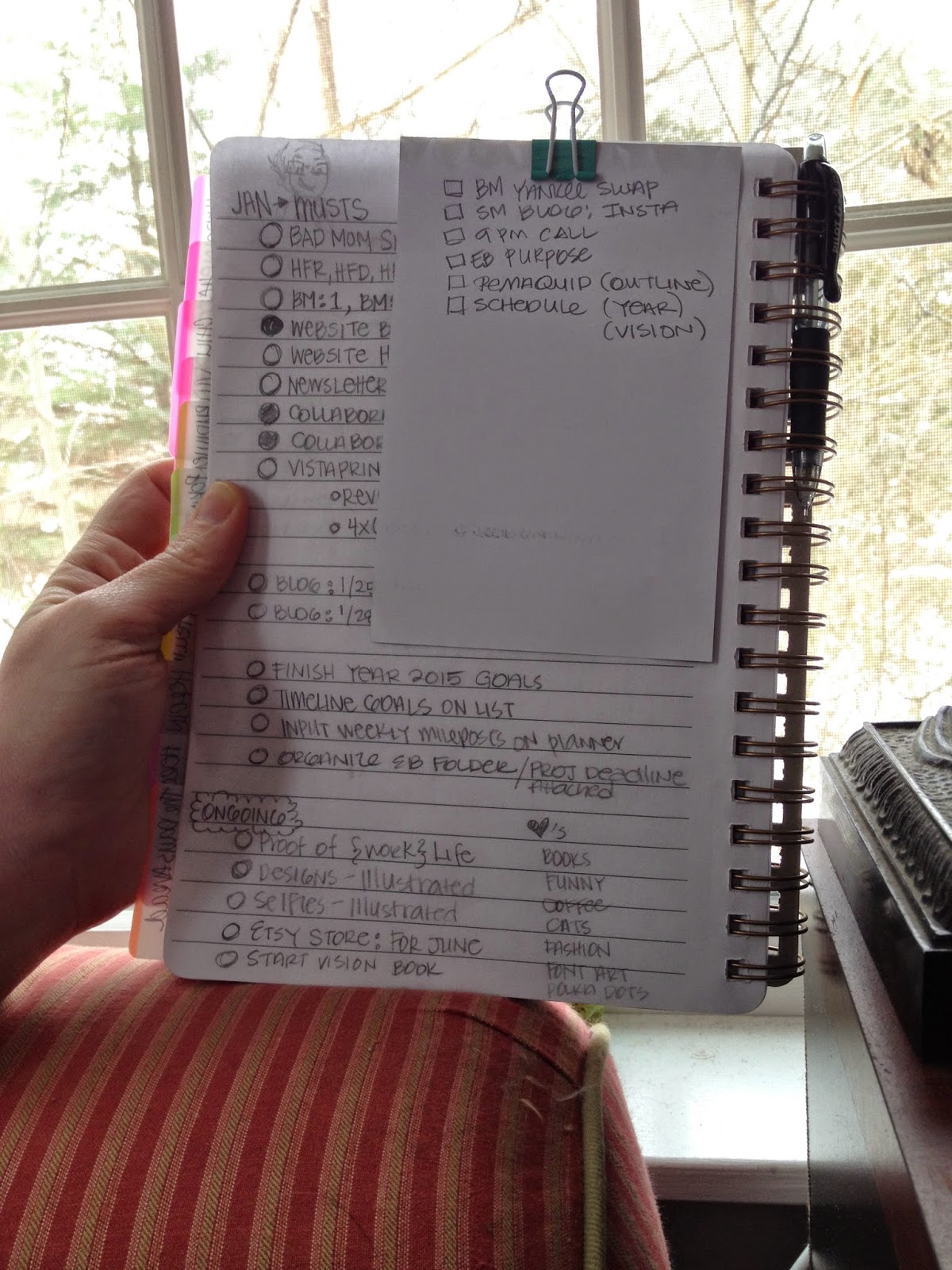 If I don't get through my daily list? I bump it into the next day! (Yesterday I hit everything, so new goals today!)

Also, I belong to a Facebook group (Cherry Adair's Butt-In-Chair) where I note my Goals for the Week AND What I Accomplished for the Week. This is huge for knowing that I'm chugging along, even if the goals I set for myself don't match up with what I accomplished.

I'm still nailing down the details. What I do know is:

1) I can't be overly fastidious with goals for a month-to-month schedule. It never works out.

2) I have to create the vision statement, with the purpose behind each thing I'm doing written down. I also look at the market and what will support what I'm doing (e.g., romances get self-pubbed, but chapter books go to New York).

3) Write down a running list, a malleable and constantly evolving list, of  "Things to Get Done in 2015."

4) Break down the goals I have into quarters, as in "Get These Things Done By First Day of March 31." Like so: 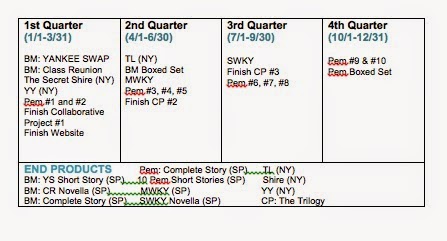 5) Make sure that I not only think through and loosely plan books, but also ways to make my books more visible, make myself more visible, and how to strengthen the overall "entity" that is me and my books (aka, brand). I actually have my plans broken down into:

6) Not everything that works for others works for me. Some authors use stickers on a calendar when they've met their word count for the day. That just stresses me out. Others can plan out their day to the minute--I actually get self-destructive, purposely NOT meeting these minute-by-minute deadlines because I get pissy that I created them in the first place! Paging Dr. Freud...

Why What I Did in 2014 Ultimately Worked

I didn't get to one book (about a CEO of a matchmaker site), nor did I get to a series that I've been working on for five years.

In this business, you can only go as far as those things you HAVE done. What I did do in 2014 was create:

-Two Romance Books
-Two Women's Fiction Books
-One Chapter Book (which I wrote for my daughter and finished at 4:30 a.m. Christmas morning and which I'll be re-envisioning and revising in my 1st Quarter of 2015)
-My website...TWICE. Once was on the Wix, which just didn't work for me, and the other time it was on Blogger. I like Blogger. It gives me a good foot up on the Google search engines AND it keeps me from piddling around with it too much due to its limitations (there are only a handful of templates as opposed to Wordpress's thousands). Limiting my choices is best for my productivity!
-Dozens of blog posts. I am actually consistently writing blog posts! I've never done that before in the 10 years I've been writing fiction.

What I accomplished is what I partially envisioned at the end of 2013--and partially what I hadn't envisioned by allowed myself to re-envision. 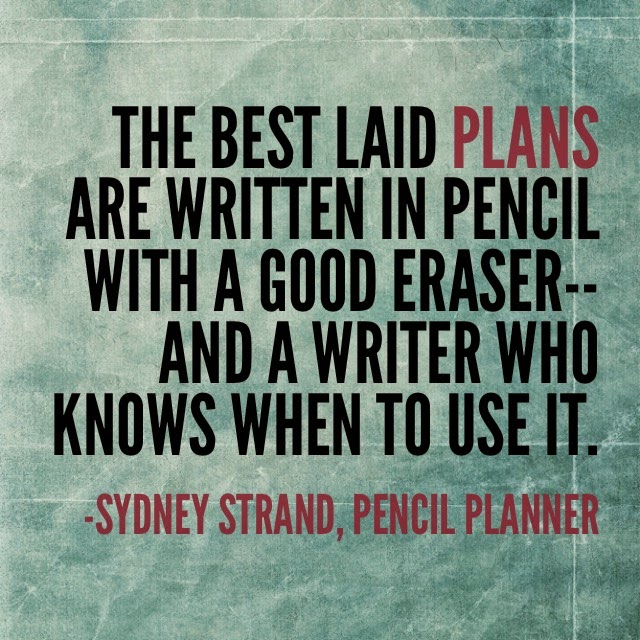 Here's to making 2015 a very, VERY productive year. Figure out what works for you, sooner than later, and keep doing it. And let go of the stuff that works for other people but just makes you run around in circles, finishing nothing and making you feel like a jerk of a failure.

You're not, my darling. You just haven't created a realistic plan yet. ;o)